Sweet and sour pork or 咕噜肉 is undisputedly one of China’s most famous dishes and exports.  Of Cantonese origin, this winning combination of crispy and crunchy pork bites coated in a vibrant sweet and sour sauce has captured the appetitites of many both in and out of China.  I am so excited today to announce that I have finally discovered the perfect recipe for sweet and sour pork! The secret?  Instead of using vinegar for the sour element in the sauce, I used plum sauce (苏梅酱) which lends a deeper and more natural fruity sourness to the sauce.  Sauce solved, what about the pork?  One of my pet peeves when it comes to sweet and sour sauce is soggy and greasy pork – for a guaranteed crunchy and non-greasy bite, fry the pork twice.  This is also a two-part batter in that the pork is first marinated in egg, a little custard powder, corn flour and a tiny bit of water then dredged in a mixture of all purpose flour, corn flour and rice flour.  Perfectly crispy golden nuggets have never been this easy!

If you are a fan of sweet and sour pork, you absolutely have to make this – satisfaction guaranteed by Tastes of Home!

Ingredients:
1 pound worth of pork (semi-lean), cut into 3 inch cubes (if you are going to an Asian grocery store, just tell the butcher you are making sweet and sour pork and he will know which part to sell to you)
Enough oil for deep-frying

Sauce:
4 tbsps ketchup
3 tbsps chilli sauce
3 tsps plum sauce (I like the Yuen Chun brand)
1 tsp of light soy sauce
2 tbsps water
1-2 tbsps sugar (add sugar tablespoon by tablespoon and do a taste after the first to see if you want to add more sugar)

Vegetables:
1 large onion (I used red onion, but you can use yellow onion as well)
1 cucumber, peeled and cubed
1 small capsicum
1 red chilli pepper
It is also customary to add pineapple into sweet and sour pork but I ran out so I skipped it this time.

Method:
1.  Prepare the sauce first by mixing all the ingredients in a small saucepan and bring to a boil mixing well.  Remove from heat once well-mixed and pour into a bowl.  Set aside.
2.  Marinade the pork in the above ingredients for about 10 minutes.  Use your hands to mix the marinade well into the meat.  Set aside.
3.  Prepare the vegetables listed above.
4.  Heat up enough oil for deep-frying.  Turn heat to medium.  Fry the pork cubes batch by batch after dredging through the mixture above.  Fry until 60-70% cooked, remove from oil and drain on prepared paper towels.  I changed my oil once as some of the flour may come off the pork and will burn easily, hence the oil will blacken and will need to be changed.  Allow to cool for at least 15-20 minutes.  Fry again until cooked and crispy!  Repeat for the remaining cubes.  Allow to cool for about 15-20 minutes. 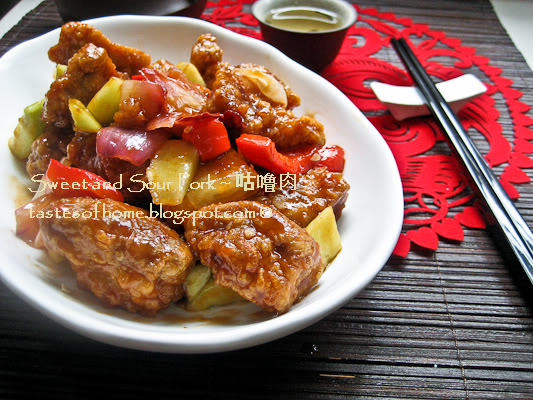